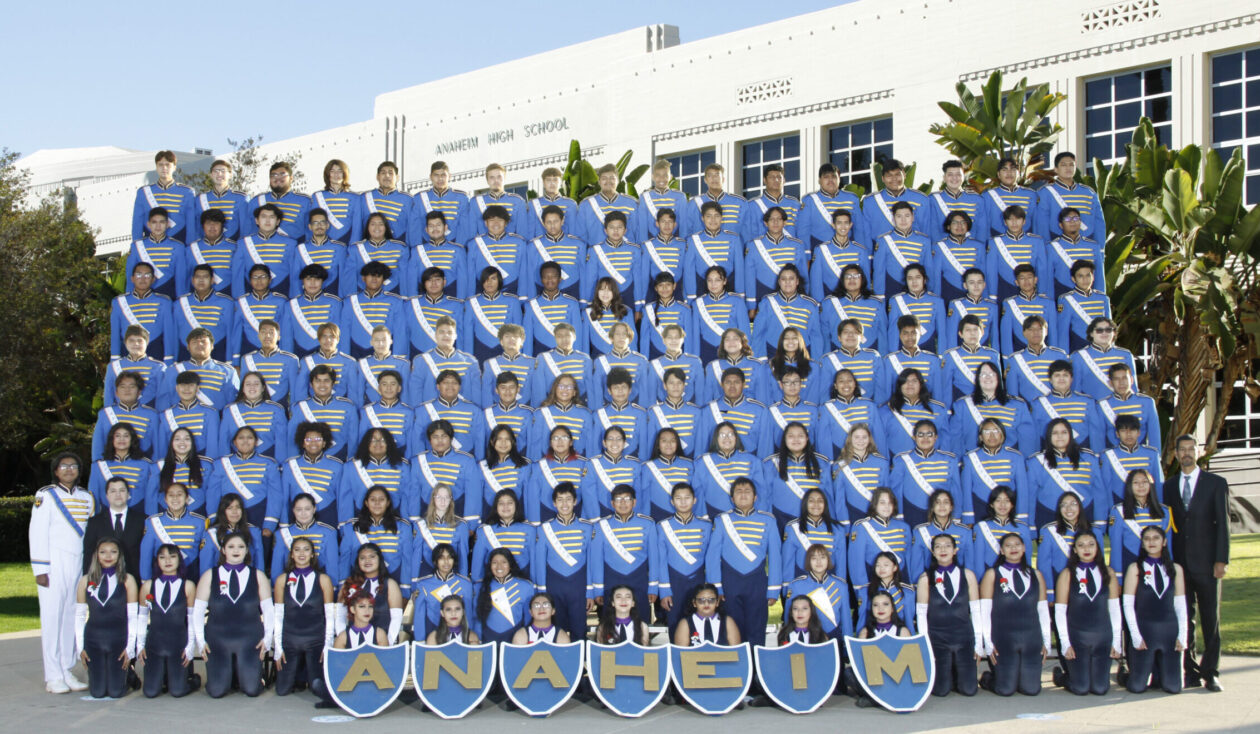 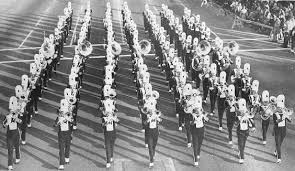 1925        Thirty members. Joshua Williams, Dir. First uniform consist of white pants, white sweater with band insignia and sailor cap with A.U.H.S. in felt letters. Boys devoted one night a week to band practice as they had no regular band class.

1927        Mr. Williams, Dir. Band reorganized on a military basis. They have class rehearsals including a regular march-day. 1926-27 class is first band to make use of new music building. Band played over radio to boost Anaheim on Anaheim’s radio day. Uniformed sweater changed to gold.

1929        Band is on a military basis with a Captain, Lieutenant, Sergeant, Corporal and Drum Major. Forty-five boys appeared as Persian Beauties at Halloween Parade. “Although most of the Persian were not beautiful by any means at close range, the effect was very comical and caused much laughter along the line of march.” Joshua Williams, Dir.

1931        Under Mr. Williams’ direction band won Sweepstake Cup in Armistice Day Parade. Seventy boys in band this year. This is first time band played for Anaheim unit of high school cadets, and was officially a part of that organization.

1933        Joshua Williams, Dir. Band won second place in annual Armistice Parade. They are asked to participate in all civic demonstrations.

1934        Colonists Band consists of 60 members. Band played at Halloween Parade. Armistice Day Parade at Orange and exercises at the improvement of 101 Highway and Music Festival.

1935        Combined Junior and Senior band, consisting of fifty-five members has become an indispensable part of this school. Mr. Williams, Dir.

1937        Fifty-three members. Mr. Williams, Dir. Three girls enlisted as drum majors and were appointed to lead the group in all its appearances. Girls dressed in dark blue slacks, gold blouses and regular caps. The girls add something to the general performance of the band, and it seems that girl drum majorettes are here to stay. Boys uniform consists of white shirts, long ties, white pants and gold capes.

1939        For the first time since the completion of the new auditorium the commencement exercises will be held in City Park. As a result, the band, rather than orchestra, will furnish music for this occasion. The ability of the band to play for parades, games and concerts has made it one of the most popular musical organizations in Orange County. Mr., Williams, Dir.

1940        Mr. William Cook, Dir. Eight majorettes wearing short blue skirts and gold blouses are now leading the band During the half-time performance Willard Adams portrays a sailor, Marches down field playing piccolo. Band gathered around him and articles of his clothing were thrown up into the air. Suddenly he emerged in the costume of a Colonist carrying a six foot musket over his shoulder. Band played for Los Alamitos Arbor Day Program and Armistice Day parade. They led the Carnival and Halloween parades.

1942        Band played for opening game of the Philadelphia Athletics at La Palma, for home basketball tilts, for Open House and in the annual Music Week Concert.

1950        Band has 58 members and participated in every parade which they are still eligible to enter and placed high in every performance in everyone. Jo-Ann Burdick was baton twirler.

1956        Sixty-four members. “owing to their sharp uniforms, crisp marching and synchronized playing, band compiled many points for colonists cause.” Played for half-time at Los Angeles Coliseum for U.C.L.A. games.

Second band was called Anaheim’s Blue and Gold Band. They have performed at nine football games and six half-time shows. They are a unit of the Anaheim High School Marching Band and are unique in the fact they are an all brass band.

1961        Took part in dedication of Martin Luther Hospital. Concert Band was selected number one of ten best bands in Southern California, enabling them to compete in the sixth Annual Corona Band Jamboree where they placed sixth. Making it only the second time in Anaheim, in fifteen years, the band brought home a superior rating from the District Concert Band Festival in Newport Beach thus permitting them to go on to the regional contest in Long Beach. Los Angeles Times picked then as the best marching band of 30 high schools in Orange County. Traveled to Arcadia, Corona, Hawthorne, Orange, Long Beach and Disneyland. Robert Reynolds, Dir.

1971       Band Played “Fairest of the Fair” parade march while taking 1st Place in Class B Bands at the El Primero Band Review in Santa Monica. The Band received 3rd Place in Class A at West Arcadia and won 4th place in Class C at the Long Beach All-Western Band Review.

1972       Band won Sweepstakes at the Maytime Band Review in National City while marching to “March Grandioso.” The Band won 3rd place in Class C at El Primero Band Review while playing the “Stars and Stripes Forever.” This was followed by 2nd place in Class A at West Arcadia and 4th in Class B at the All-Western Band Review.

1973     The Colonist Band took 1st place at Santa Monica while playing “Barnum and Baileys Favorite.” Band finished 3rd in Class at the West Arcadia Band Review and 2nd in Class at the All-Western Band Review. In the Easter holiday period the Band and Drill Team flew to Hawaii and spent 8 days on the Islands of Oahu and Kauai. While in  Honolulu the band was honored to play at Tripler Army Medical Center in a performance that was televised by Closed Circuit TV to all military installations in Hawaii. The Band also performed twice in Kauai and received the Key to the Island of Kauai from the County Leadership.

1997-2002     David Ameele, Dir. joins the faculty at AHS as a graduate of the prestigious Eastman School of Music. Mr. Ameele energizes the Colonist Jazz Band and invites Jazz Artists such as Bruce Babad and Bobby Rodriguez to regularly perform for students. Band students such as Bincins Garcia, Breysi Garcia, and Fernando Martinez would later become high school band directors in Southern California.

2003-2009 Scott Domingues, Dir.  The Music Program continues expanding and is established as a full bodied program including a quality Concert Band, Symphonic Band, and Wind Ensemble in addition to the existing Marching Band, Drumline, and Jazz Band. Concert Bands receive Superior ratings at SCSBOA Festival. Membership grows from 75 to being consistently over 110 strong.

2011        Field show is titled “Groovin’ On the Latin Side” featuring the jazz hits of Chuck Mangione. Drum Majors are Ruby Rodriguez and Claudia Esparagoza. Parade March is “His Honor”. Colonist Jazz Band becomes a competitive ensemble during the spring semester.

2014        Field show is titled “A Nightmare in Wonderland” and features the music of movie composer Danny Elfman like the Nightmare before Christmas along with the themes of the classic story of Alice in Wonderland. Drum Major is Jennifer Legasse. Parade March is “Ancient and Honorable”. Wind Ensemble receives Unanimous Superior Ratings at SCSBOA Festival. Marching Band performs at Chinese New Year’s Parade in San Francisco which is a televised event viewed by millions of people.

2018    Field Show is “Arabian Nights” and features music from Scheherazade. Drum Major is Jesse Toro and band receives 2nd place at every competition scoring higher than almost all of Anaheim District Bands. Percussion took Sweepstakes trophy at Kennedy Field Tournament and broke a score of 80 on the field and a score of 90 at the Loara Band Review where they took 2nd place. Jesse Toro, Madison Brickner, Angel Avalos, and Miguel Jimenez represent AHS at Tournament of Roses Honor Band. Wind Ensemble receives Unanimous Superior ratings at Festival and Parade Band gets 1st Place at the St. Patrick’s Day Parade in San Francisco.

2019     Members in full unit total 175, possibly making it the largest group in Anaheim HS History. Field show is “To the Moon…A Golden Jubilee” commemorating the 50 year anniversary of the Moon Landing, and Parade March is “Father of Victory”.  Drum Major is David Frias. Band received 1st place awards at the Los Altos Field Tournament and the Loara Band Review with a score of 91.45. David Frias, Jose Rocha, Irving Ortiz and Miguel Jimenez represent AHS at Tournament of Roses Honor Band. Miguel Jimenez gets 1st chair tuba spot at SCSBOA All-Southern Symphonic Band and goes on to major in music. Wind Ensemble receives Superior ratings at Festival and then school is closed for the remainder of the year due to covid -19 pandemic.

2020      Due to the Covid-19 pandemic this academic school year takes place entirely online. Every effort is made for band and colorguard students to continue learning and participating in performances by practicing and recording themselves individually at home. Several “virtual concerts” which premiered on YouTube display the talents and efforts of the Colonist Band & Pageantry students during this period of “Distance Learning”. Drum Major is Robert Nava.

"Once A Colonist, Always a Colonist"